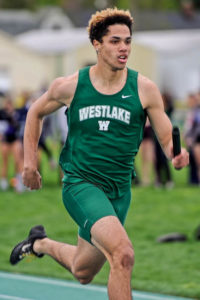 Walls was named Track MVP for the 2019 season, edging out quality contenders like Josh Hill from Amherst (last year’s MVP) who won 3 events this year, and Lakewood’s Tyler Hannah, who won 3 events and placed in a 4th. Joe Svec of Avon won the Field MVP after winning both the Shot Put and Discus events.

Kevin is the first Westlake athlete to ever win four events in the SWC meet, and he has done so twice. Additionally, Kevin holds two different Westlake team records.  Last year his 4x200m team broke the school record and this year at the SWC meet Kevin tied the school record in the 200m dash. He looks to improve on these marks and others in the upcoming weeks as he makes a push to qualify for the OHSAA state meet.